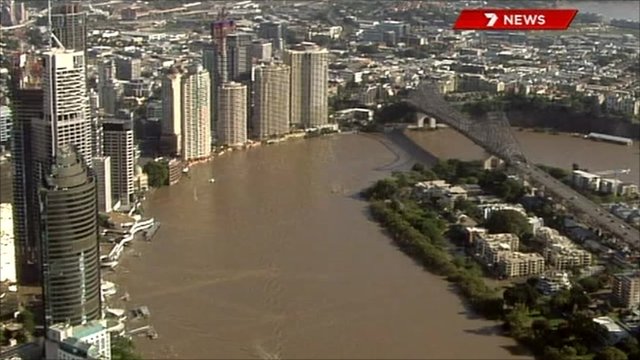 The Australian city of Brisbane has woken to widespread flooding, although the peak level is a metre lower than feared, officials say.

However, dozens of suburbs and thousands of properties are inundated.

The death toll in Queensland's flooding stands at 13 so far, with dozens more reported missing.

Although the flood level in Brisbane was lower than feared, Queensland Premier Anna Bligh said: "This is still a very dangerous situation and we have thousands of people who are waking this morning to the total devastation of either their homes, businesses - for some people it's both.

"We should be very mindful that Mother Nature has done shocking and devastating damage. People are living, at the moment, in what I would call a post-war zone."

Ms Bligh had warned that many of the people of Brisbane would wake to scenes they had never seen before.

Roads are inundated, railway lines have been cut and sewage is spreading into the waters.

The suburb of Rocklea is under 3m of water, the Brisbane Courier Mail reported, with some factories and homes only visible by their roofs.

The water levels will be high during Thursday but are not expected to exceed 4.6m. The levels will only slowly recede over the weekend.

One reason for a reduced peak was that the Wivenhoe and Somerset dams had reduced the amount of water they were being forced to release to ease pressure.

Brisbane airport survived the swell and remains open, with almost all flights unaffected. However, passengers are advised to check before travel. Public transport to the airport is severely limited.

Brisbane's Gateway Bridges were closed and reopened twice overnight amid fears that floating debris could cause damage.

One huge concern was a 300m-long chunk of a concrete river walkway that sheared loose and sped down the Brisbane river.

One resident, Suzy Wilson, told the BBC: "It's just an enormous structure, it's very long, it was broken up in a couple of places, it's simply extraordinary to see it come past."

Water police managed to escort it away from damaging any bridges.

Wednesday had seen boats and pontoons floating down the river, along with massive amounts of other debris.

Brisbane Lord Mayor Campbell Newman said he had "a sense of horror and awe about the power of the river".

"At the moment we are seeing pontoons and people's boats... sadly in the coming hours we might be seeing bits of people's houses... and that breaks my heart.''

The city's West End, Taringa and Indooropilly districts have been badly hit.

Many supermarkets in the city have been stripped of supplies, while a number of rubbish collections and bus services have halted.